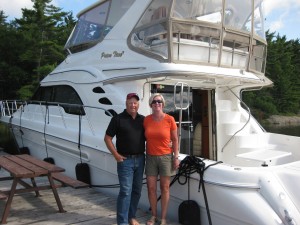 Ready to leave from Bone Island!

Just like any trip, the last few weeks have been quite hectic getting everything in order both on the boat and on dry land.  But, from now on, you will receive reports about life on-board, the experiences we have traveling and some information about the areas we travel through.

We cut the lines on Thursday, August 6th from the Bone Island docks and traveled north on the Small Craft Channel to Regatta Bay.  We have made this same trip dozens of times before but, this time we are not sure when we will get back to the same area again with Prime Time V.  Somehow, it just felt a little different as we traveled on the channel not knowing what is in store for us in the future.

For those of you who do not cruise the area, the Small Craft Channel on the Eastern Shore of Georgian Bay has quite a history.  The first white man to travel this route was Etienne Brule in 1610 who had been sent there by Samuel de Champlain, the Governor of New France.  Champlain himself canoed down the eastern shore in 1615 on his way to Huron territory and he was so fascinated by it he named it La Mer Douce. “the Freshwater Sea.”

It wasn’t until 200 years later Captain Henry Bayfield of the British Admiralty charted the Great Lakes and gave Georgian Bay its present name in honour of King George IV, who was in 1820 the newly crowned King of England.  What is amazing today is that so much of Georgian Bay remains the same as it was when Brule, Champlain and Bayfield traveled this body of water.

On Friday, August 7th we were up early knowing the weather would be favourable for our trip to Killarney.  We started the engines at 7:00 AM, pulled the anchor and went north and on into the open bay at Point-au-Baril.  Just as we suspected from the forecast the water conditions were ideal with a foot of chop when we started.  As our trip progressed the waves settled down to near calm for an ideal slow cruise of 10 kts.

Seven hours on calm water at slow cruise allows you to relax.  Just set the autopilot and occaisionally monitor the instruments.  In the past on a voyage like this, Nancy would read her book and I busy myself reading a boating magazine or just playing with the electronics.  Knowing we would be facing some long hours on the bridge we added a television.  Decadent, I know but, it is a great diversion for both of us.

We arrived at the Sportsman’s Inn at 2:15 PM to find that the rumors are correct, the business is open once more.   The main fuel dock is new with a new pump-out and gas/diesel pumps and the main building which is a hotel is being completely renovated.  While it is not yet complete it will be back to its original condition or better when it is completed.  The new owners are sparing no expense.  For pictures and contact information visit http://www.sportsmansinn.ca/ 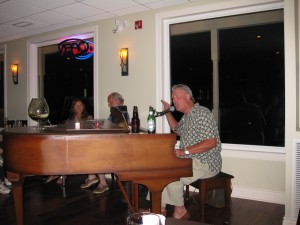 Frank at the piano at the Sortmans Inn - Killarney

Our best surprise is that Frank The Piano Player is back.  Frank knows almost every boater on the Bay and after not hearing him for five seasons it was great to hear the tunes, sing the songs and remember all of the good times we have had with Frank and our friends around the piano.  Frank, if you are reading this make sure you send me an e-mail with your contact information.

Saturday, August 8th we decided that due to the wind conditions (20 kts from the east) we would sit back and spend another day at Sportman’s Inn.  This allowed us to walk to the lighthouse and return to Mr. Pearch for lunch.  Mr. Pearch is a bus that has been set up on the docks in Killarney.  Best perch on the Bay.