Moving On To The USA

Since the last web post a few  days ago in Oak Bay, Prime Time V has put another 140 miles of water under its keel.  On Monday morning we left Oak Bay traveling 48 miles to Meldrum Bay, a small village of just 48 residents on the North West corner of Manitoulin Island.  The North Channel was nearly calm so it was a good day to press forward.

Meldrum Bay is a sleepy little village with some major progress by its standards.  With only 48 permanent residents we were pleased to see that the restaurant/hotel is now under new management as well as the general store being open as well.  Most of the residents work in the tourist industry or to the west in the quarrie.  A new shore wall has been installed in the marina to reduce swell off the North Channel and a new dock and dock masters office is planned.  Anywhere else - no big deal but in Meldrum Bay, this is progress!

The only other residents of Meldrum Bay are the bears, rabbits and foxes.  Although Nancy was determined to go for a walk while we were on shore she limited her trecks to the main roads.  Meeting a bear was the last thing that she wanted to do although I assured her the bear would not want to meet her either!

On Tuesday, we moved westward to our first stop in the United States -Drummond Island.  Another 44 miles under our belt.  Fortunately, Customs and Border Protection Services have an office in Drummond Island Yacht Haven which made clearing us and the boat very easy.  Both officers who came to the boat were extremely pleasant and the paper work was finished in about five minutes.

It was great to get on the dock at Drummond Yacht Haven since the wind and wave conditions built as the day went on.  The morning forecast predicted light winds and calm seas but as the day progressed we encountered 20 Kt winds with up to two foot seas.  In a 56 foot boat it is not that it is so uncomfortable but rather annoying that we were getting this kind of weather.  We slipped into the dock at Yacht Haven and were happy to know we would get a good night’s sleep.

We initally met the crew of “Izzy R” a 49 foot Defever Trawler in Meldrum Bay with a home port of Irvine, California.   Jeff and Izzy, the owners bought the boat specifically to take the Great Circle Route.   We got to know them and their friend Dennis better in Drummond Island.Their trip started in Florida when they bought the boat on East Coast of the USA last year.  After wintering in Florida they cruised up the Eastern Seaboard, up Hudson to Lake Champlain, up the St. Lawrence to Montreal, turned right onto the Ottawa River and then through the Rideau and Trent-Severn Canals.  Their goal is to Chicago down the Mississippi and the Tenn-Tom Waterways and back to Florida.  More and more cruisers are doing this.

We found a common interest and new friends when Jeff came to the boat after noticing our America’s Great Loop Cruising Association burgee on the bow. 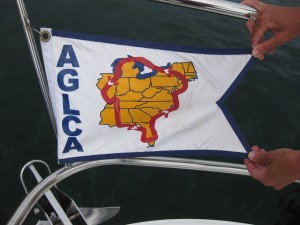 They are members too and it is quite common to exchange cards and compare notes of our travels.  You can visit AGLCA’s website by going to http://www.greatloop.org/?pid=1

The following day, with calm winds, we pushed on for another 46 miles from Drummond Island to Mackinaw Island.  Mackinaw is a great island.  No motorized vehicles are allowed with only bicycles, horses or your feet being the modes of transportation available.  We have been here before but decided to stay for three days to take a break from travel and enjoy the sites of this historic island.

We’re now on our third day here and other than the afternoon we arrived winds and rain have been the order of each day.  On our first night, the winds came directly out of the south east which is the only open access the waves had to the harbour.  With stong wave action in our slip, neither of us got much sleep.   We woke at 4:00 AM to find that the stern starbord line had snapped under the wave action.  No small feat since these are 5/8″ lines.

We will be telling you more about Mackinaw Island in a following web post.