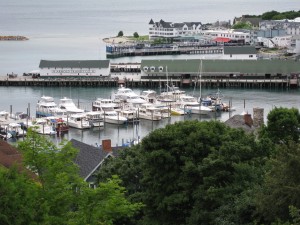 This was a fourth trip to Mackinac Island and we enjoy the island each time we go.  The absence of automobiles, horse drawn carriages, fudge shops, the 19th century architecture, the history, bike riding and the people you meet all add to the charm being there.  Of course, like many American “destinations” the island markets it features like the Grand Hotel’s porch, Arch Rock or the historic fort to the max.

As a result, the island is visited by mainland tourists who arrive daily on one of the many ferries crossing the Straits of Mackinac at high speeds.  These mono-hull or catamaran boats run across the two to three miles of the strait propelled by water jet drives that send plumes of water a hundred feet behind and travel in excess of 30 mph.  Each and every load arrives with tourists commonly known as “fudgies” (those in search of Mackinac fudge). 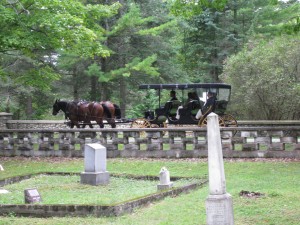 We stayed on Mackinac Island for four nights, one night longer than we originally planned.  Other than the afternoon we arrived the days were filled with clouds, occaisional rain and for three days, high winds which whipped up the waves on Lake Michigan and through the Straits to four to six feet.  We decided to stay put based on the forecast and prevailing conditions since our schedule remains flexible plus it allowed us some valuable shore time for bike riding (both of us) and walking time for Nancy.

On the day tornados were reported in Southern Ontario, Mackinac Island received its effects from the storms as well.  The winds were out of the south east, the only direction open to the Straits and during the night we awoke to feel the boat moving more than usual in the slip.  We went out to the back deck to find that waves coming on to our stern had snapped one of our dock lines.  The dock lines are 5/8″ Dacron so you can imagine the force of the waves.  And - we had some protection from boats behind us!  I am not sure how any of these people slept on board. 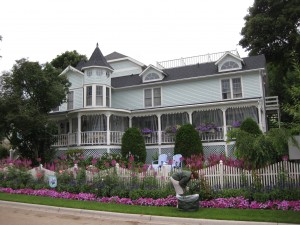 The sun rose on the morning of August 23rd with sunnier skies and calm waters so we decided it was a good time to leave and travel to Harbor Springs in Little Traverse Bay on Lake Michigan.  Sixty plus miles of smooth running at 9 kts then into the municipal harbor where we met our friends on “Izzy R” again.  We had a great dinner on board with them to what may be our last contact until possibly next winter when both boats are in Florida and Bahamas.  We look forward to seeing them again.

For the record, you will see two spellings for the island, the strait and Mackinaw City which is located on the mainland.  Originally , the name Michilmackinac tied tonges for spellers for decades.  Native Americans called the hump-backed island in the waters joining lakes Michigan and Huron Michilimackinac, meaning “place of the great turtle”  French settlers who came to the area in the 17th century gave at least 55 spellings to the name but eventually Michilmackinac (with the silent “c” at the end) emerged as the favoured form.
Though first applied to the island, the name Michilmackinac was eventually given to the entire Straits of Mackinac region.  In time it was shortened to Mackinac.  The founders of Mackinaw City opted for the phonetic “aw” spelling, probably as a way to distinguish their town for Mackinac Island for the confused postal carriers.  So today, Mackinaw City retains the spelling “aw” while the bridge, straits and island steadfastly cling to the traditional  “ac” spelling.  No matter how it is spelled however, it is always pronounced Mackinaw!  (I was always confused with this so, I hope this clarifies the issue.  The source of this information is from the Mackinac Island Visitors Guide.)