On Wednesday, August 26th we took a short 19 mile run out from Harbor Springs to Charlevoix, Michigan through Little Traverse Bay.  Although the winds were light, the waves were a bit sloppy with the remnants of the rain and stormy weather we had on the 25th.  Before we talk about Charlevoix, here is a bit of information about Harbor Springs. 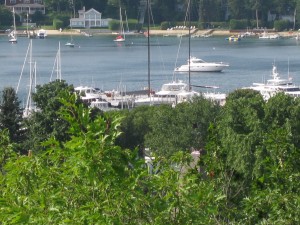 The Town of Harbor Springs sits just inside of a point of land protecting it from the westerlies that are prevalent in the Great Lakes Basin.   It is a “picture perfect” resort community with plenty of stores geared to the summer residents that visit each year.  Ice cream, antique, interior design, lady’s and men’s fashion stores are on the main street.

While we were here, we visited two of the larger boat dealers in Northern Michigan - Irish Marine and Walstoms.  Both are first class operations and are dealers for some of the finest boat brands available in North America.  Walking the docks, we could see that both of these dealerships have a very strong base.  Vikings, Hatteras, Tiara, HInkley’s all were represented at the dock with some as big as 75 feet.  Parked with these vessels, Prime Time V didn’t look so big any more.

The town bases its existance on the summer residents who come from Southern Michigan, Illinios and Ohio. Originally, the owners would travel from these destinations by train or in some cases by ferry.  In fact, the long pier in the municipal marina was originally built to extend far into the water to reach deeper water in the middle of the sheltered sandy bay.

The homes that line the streets are old with picture perfect gardens overflowing with colorful flowers.  You can tell though that the recession in the United States is taking its toll as many of these wonderful homes had “For Sale” signs on their from lawns. 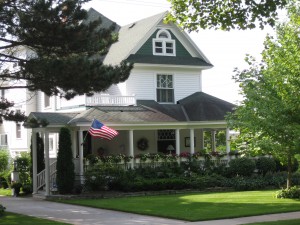 A Summer Home In Harbor Springs

Reading the real estate ads in the local paper only confirmed that many of the homes for sale were attractively priced compared to the prices we are used to seeing in the Muskoka’s or on Georgian Bay.  $700,000 does not sound like a bargain but, when you consider a 3000 square foot home with 150′ of frontage of sand beach on Little Traverse Bay that was an architectural jewel could be purchased, one could consider it to be a real estate bargain of sorts.

I should tell you that Harbor Springs shares Little Traverse Bay with two other towns of note.  Petoskey, which is known for its many architecturally inspired homes and Bay Harbor and newer community that has many single homes as well as condos.  This community is built around a 90 acre, flooded quarry that was converted to a resort destination.  The marina has 400 slips, handles boats to 250 feet and has a lake depth of 75 feet.  An ingenious conversion of an idle quarry!

Little Traverse Bay by the way is not so little.  My guess is that this bay is over 10 miles long and most likely four miles wide or wider.  Water depths are over 200 feet and the bay is ringed with beautiful sand beaches and high sand dunes.  It reminded Nancy and I of Sand Banks Provincial Park on the western shore of Prince Edward County.

Since we were in Harbor Springs for three days and weather was not cooperating anyway, I took the opportunity to call in the local Cummins dealer to service the 20 Kwh Westerbeke generator we have on board.  A check of the service records indicated it was well over due for an adjustment to the valves and an inspection of the diesel injectors.  While the valves were within tolerance, a re-build of the injectors and the injector pump was recommended so, they were sent out for repairs and will be back by the end of the week to be re-installed.

As I said, we moved on from Harbor Springs to Charlevoix on Wedensday, August 26th.  We’ll stay here until at least until Saturday morning since Friday is the day the injectors and the injector pump is supposed to be back.  Here is hoping it arrives on time so we do not have to wait until Monday. 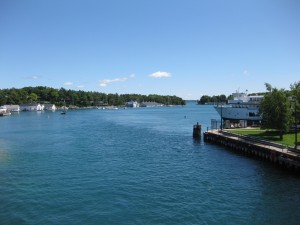 The entrance into Charlevoix is almost hidden from view as you approach it from Lake Michigan making the chart plotter invaluable.  Once you find the entrance, you travel three quarters of a mile on the Pine River to the main street bridge into Round Lake where the Town of Charlevoix is located.  Round Lake is only about 1500 feet in diameter but is nearly 60 feet deep so, anchoring is extremely limited.  Besides, you will want to park on the town’s new docks next to the main street.  There are numerous quaint shops and good restaurants close to the marina as well as an excellent farmers market on the marina property on Thursdays.

When we docked, the dock staff told me that we were pronouncing Charlevoix incorrectly.  Being Canadian and having some high school French language training we pronounced it as “Shar-le-vwa”.  The locals apparently lost their knowledge of French some time ago pronouncing the name “Shar-la-voy”.   So, there really is a cultural divide between Canadians and American!  We all had a good laugh over this!