Since we wrote to you on September 3rd, we have traveled from Harrisville, to Harbor Beach, to Port Huron and today on to Grosse Pointe Yacht Club in Lake St. Clair.  Our stays in Harrisville and Harbor Beach were normal stops along the lake arriving early to mid-afternoon each day with Nancy coercing me into a walk or a bicycle ride for some exercise.  Both of these little villages were laid back with little local activity.  Just sleepy little eastern Michigan villages. 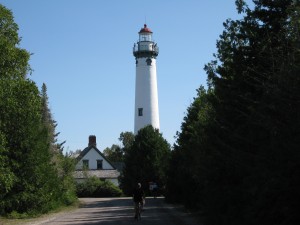 Sometimes these afternoon trips do lead to seeing some of the local sights however, such as when we arrived in Presque Ilse, Michigan on September 2nd.  The dockmaster, a local lady who has retired with her husband but, works at the local marina “just to keep her busy” suggested we cross the street to convenience store which was the only local business in the village other than the marina and a restaurant.

She told us that there were bicycles which were free to use to ride around the local paths and trails.  We also learned that there were two light houses with museums just a mile apart which could be accessed by road and trail.  Off we went not know what to expect.  The original light house was built in the early 1800’s to lead the ships into Presque Ilse for fuel cargo.  At that time the village boasted 400 inhabitants.  A quick tour through the light house keepers home and then a walk to the top of the tower revealed a excellent view of this protected harbor.

Later, we continued down the road to the “new” northern light house which was built in the mid 1800’s.  It’s purpose what to guide local shipping past Preque Ilse westward.  At 183 feet high, it is the highest public accessible light house on the Great Lakes and of course we had to climb to the top to see the panoramic views of Lake Huron and the surrounding coast line.

After leaving Presque Isle we traveled to Harrisville, Harbor Beach and on to Port Huron arriving on Saturday of the Labour Day weekend.  While the boating activity on Lake Huron had been very limited, the weekend traffic was out in full force just north of the Bluewater Bridge which crosses the St. Clair River from Port Huron, Michigan to Sarnia, Ontario.  Passing under the bridge closed out our Lake Michigan, Lake Huron and Georgian Bay travels which we will most likely not see again in Prime Time V for several years.  The good news is that we had seven consecutive days of dead-flat cruising conditions on lakes that normally do not let you off that lightly.

We decided to stay at Port Huron for a couple of days to take time out from our travel schedule and to try to miss some of the Labor Day weekend boating traffic.  Port Huron is the home of the Great Lakes Cruising Club and while we cruised right passed the GLCC offices on the river, we unfortunately could not meet the office staff since the office was closed.  We cruised up-river past the first bridge on the river to the River Street Municipal Marina.  Once we parked bow into shore we watched the local and visiting boaters watch us watch them at close range.  The river here is quite narrow and the 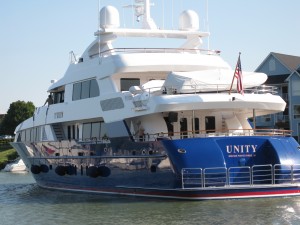 traffic is constant with some larger vessels such as Elena Ford’s (yes, that Ford family) 130 foot Palmer Johnson inching through the traffic.  As you can see, it is quite a craft which we would see again later.

All the way down the coast of Lake Huron we kept running into a sail boat name “Kinji”.  For a couple of days we noticed they would leave an hour before us and then they would arrive at the next destination two hours after we had arrived.  It became a bit of a running joke and finally we introduced ourselves to Bill and Debra Laule, charming people, recently retired who were bringing their boat back from Lake Michigan after a summer of cruising to their home port, Grosse Pointe Yacht Club.  We asked them which marina we should stay at once we arrived in Lake St. Clair?

Bill quickly suggested he could sponsor us into the yacht club since we were Great Lakes Cruising Club members and assured us we would be pleased with the accomodations.  We arrived this morning to see Unity parked on the outside wall with plenty of other large pleasure craft parked in their slips.  Let me put the calibre of this yacht club into perspective.  In 1997, the Grosse Pointe Yacht Club was accorded the honour of being named the “Number One Yacht Club in America” in a national survey of professionsal club managers.   It has maintained the title since then! 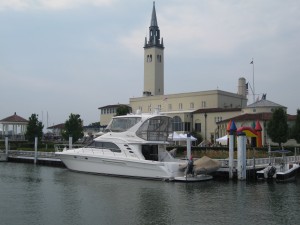 The club was founded in 1914 by a group of ice boaters who recognized the year round potential of their club’s lakefront location.  They built an 18th century Italian Renaissance building combining sun-washed stucco walls and terra cotta tile, topped by a towering 187 foot steeple.

After walking the grounds we both agreed that this is truly a spectacular location with just about every brand  and size of cruising and sail boat at its docks.  Inside, the architecture is spectacular with a rotunda in the mian hallway with a bronze statue.  The massive hall has a huge fireplace at one end of the room.

Our plan is to be at Grosse Pointe Yacht Club until at least Thursday or possibly Friday morning to allow us to explore the area and to take our spare props to a Wolverine Propellor to have them computer balanced before we go south.  I hope we don’t need to install them but, they will be ready if needed. 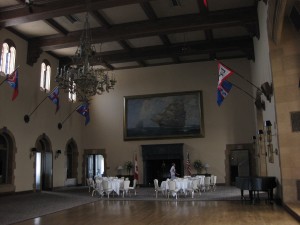 Next weekend we’ll be off to Windsor to meet some local friends for dinner as well as to switch crews on Sunday.  My friends, Bob MacConnell and Brian Tattersall will come to Windsor to help me move the boat from Windsor to Toronto through Lake Erie and the Welland Canal while Nancy returns to China on business.