Windsor, Lake Erie, The Welland Canal & On To Toronto!

Since we last wrote, Prime Time V has logged 1160 miles since leaving its home port in early August.  We left Grosse Pointe Yacht Club on Thursday, September 10th traveling through the southern portion of Lake St. Clair then into the Detroit River to the Windsor Yacht Club where we would spend three nights.

While we were in Windsor we had the opportunity to cruise the city’s waterfront with our daughter’s, boyfriend’s family, the Quinnsey’s.  Since this was the first time we had cruised this area, it was great to have them aboard to point out all of the local buildings and facilities both on the Windsor and Detroit section of the river.

What immediately strikes you is the diversity along the shoreline.  Parks, heavy industry, high-rise condominiums, office buildings, bridges and vacant lands.  Drive or walk the streets and what is evident how hard the recession has hit both sides of the border.  Homes large and small are either for sale or vacant and public lands are deteriorating due to lack of public funding.  If you are not from this area, you do not realize just how hard the recession has hit the car manufacturing capitals of North America until you see it for yourself.

High levels of security are patrolling the river on the USA and Canadian side of the river.  Windsor Marine Police, RCMP, Canadian Coast Guard, Homeland Security, US Coast Guard, Detroit Marine Police and military helicopters and police constantly patrol.  (I am sure I missed some agency in this list.) 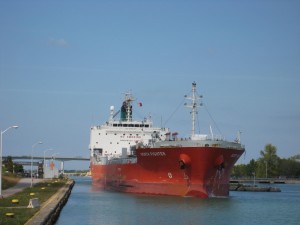 On Saturday, September 12 Bob MacConnel and Brian Tattersall arrived to help me run the boat from Windsor to Port Colborne, through the Welland Canal and on to Toronto.  We left Windsor Yacht Club early Sunday morning making our way down the Detroit River to Lake Erie in the company of lake freighters and salties some high in the water on their way to pick up a new load while others were low in the water a sure sign they were traveling their next destination to unload.

This section of the river has a controlled depth which is published each year indicating the operational depth.  That information is particularly important to the commercial ships since they load to within one foot of bottom clearance.  The greater the channel depth - the greater the load resulting in higher incomes for the freighters.

Before entering Lake Erie we made a conscious decision to stay on the Canadian side of the Detroit River and to travel on the north side of Lake Erie to avoid meeting any US border agency.  After we read the charts and the cruising guide we concluded that there are few harbours that can accomodate a 56′ boat with a 5′ draft on the Canadian shoreline of Lake Erie and those that could were not near a direct path down the center of the lake. 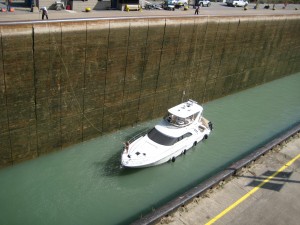 We concluded that with the fair weather we had and the sufficient fuel load on board we would continue the length of the Lake to Port Colborne, the town at the entrance of the Welland Canal.  A quick start in the morning had us waiting on the Port Colborne Municipal Dock at 7:00 AM.  After giving the vessel information over the phone to the attendant and a $200 credit card payment for lockage we were told we would be called by 8:45 AM for the 8 to 12 journey through the locks.

The current canal was completed 1933 and is the fourth system of locks since the original was constructed in 1829.  Each system that was constructed increased the overall capacity and the dimensions of the locks.  The set in use today is 27 miles long.  Each lock is 80 feet wide, 860 feet long witha minimum draft depth in the channels of  27 feet.  While commercial ships take priority in the locks, pleasure craft can transit the locks when they are not in use by bigger vessels.

We were called at 8:40 AM and told that we were next in line for transit through Lock 8, at Welland Canal’s southern entrance on Lake Erie.  Although we had large inflatable fenders the currents created by the turbulent water in the bottom of the lock kept us off of the lock walls.  Overall it was a very easy 8-1/2 hour passage.  For more information on the Welland Canal try searching “Welland Canal Locks”.  There are many interesting sites including one where the bridge was lowered too early.  For a video on this incident link to http://bing.search.sympatico.ca/?q=Welland%20Canal&mkt=en-ca&setLang=en-CA  Fortunately, we passed through all of the locks without incident! 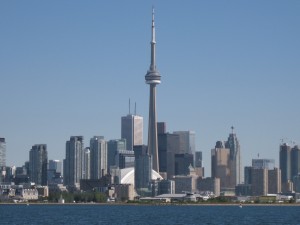 After a night at Port Dalhousie just outside of the canal’s approach on the Lake Ontario, we cruised north to Toronto to find a berth at Ontario Place near downtown Toronto.  Once again, our lake crossing was blessed with only moderate seas for the 25 mile that we had to go.

As we approached Toronto, we were able to watch a Search & Rescue helicopter hovering over a Metro Marine Unit vessel as it cruised at high speed outside of the harbour near the Toronto Islands.  They were practicing extractions (lifting two people) off of the boat into the helicopter while it was in motion.

Prime Time V was greeted by a series of Porter Airlines Dash 7’s flying low on final approach to the Island Airport as we round the break wall into the protection of the marina.

Ontario Place will be our home for the next nine days until we continue our journey eastward on Lake Ontario to Belleville then on to the Oswego Canal by October 1st.  For the time being we will enjoy all that Toronto has to offer during our stay.