Since we left Honey Harbour on August 5th Prime Time V has logged 1402.91 miles or 120 hours of running on its journey through the Great Lakes to Florida and Bahamas.  Let’s bring you up-to-date with what has happened since our last post on September 16th in Toronto. 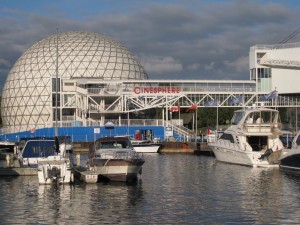 We spent nine days in Toronto at Ontario Place which is a Toronto lake front play and concert area for the community.  We were on one of the docks that was open to the public, but by late September, especially with the colder and windier weather, most residents of Toronto chose to stay away from the park.  As a place to stay, Ontario Place has its unpleasant side with strong surge currents pushing through the marina.  One morning, with the wind blowing from the south, I had to get up and get off the boat at 4:00 AM just to get on solid land.

With all of our personal appointments and tasks in order we were anxious to leave Toronto to get to Belleville which is located 100 miles to the east.  As we pulled out of Ontario Place and rounded Toronto Island strong easterly winds were right off our bow.  After a few waves over top of the bridge roof Nancy and I both decided that we should pull into Outer Harbour Marina and wait for another day before heading east.

The following morning we left Outer Harbour and with the waves running at 3 feet heading toward Cobourg we felt we could make the run with some discomfort but with no concern that we could not push on.  After Cobourg, the waves began to build higher and by the time we reached the western shores of Prince Edward County the waves had built to 6 feet.  Dozens of waves were hitting the front windshield on the bridge and running over the bridge roof.  Both of us were happy to get into the lee of the county and into Brighton Bay.

Over the next few days, we spent time with my parents who live in Belleville not too far from the city docks at Meyers Pier.   Our friends from high school, Dave and Sharon Little arranged to host dinner with 14 of our friends from my high school class at their home on the Bay of Quinte.  It was great to spend some time with people you have known for over forty years and to catch up on what had happened over the years to all of our lives.  What a great reunion. 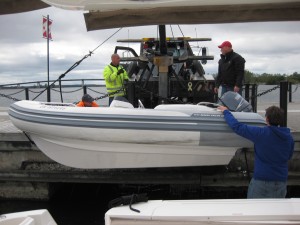 Lifting The Dinghy Off

When we arrived in Belleville after our rough trip from Toronto we realized the pounding had bent our swim platform out of adjustment and that we would have to get the dinghy lifted before it could be repaired.  What was the solution?  Fortunately, we were on the face wall in the marina.  We simply backed the boat to the pier and had a tow truck pick it off the back swim platform.  The tow truck operator drove off the pier back onto the road and we backed a boat trailer under the boat and sent it back to Toronto.  Just as well though since the dinghy has been recalled for some modifications as well.

Fortunately, our friends John Kerr and Susan Duross were arriving in Belleville to help us on the next leg of our journey through the Oswego and Erie Canals and down the Hudson River to New York City.  John knew the about the problem we had with the swim platform and offered to bring his boat trailer.  John’s son was kind enough to return the boat to Oakville for the warranty work it needed.  Friends are always there when you need them the most.

That afternoon, the four of us left Belleville with the intention of running to Oswego if the winds and waves were subdued enough to make it across the 40 miles of open lake.  As we rounded the eastern end of Prince Edward County and approached Main Duck Island the seas cooperated until we were past their protection.   The last 20 miles were rough with seas building to 6 feet or more and reaching their peak as we entered Oswego’s outer breakwall.

An unpleasant two hours for sure but we watched the following two or three days and wind and weather conditions only got worse.  It was rough but overall a good decision to get across the lake.

With our experiences from Toronto to Belleville and Belleville to Oswego these were certainly our roughest open water crossings.  While we grew up close to the lake neither Nancy or I have any fond memories of Lake Ontario during this trip.

Fortunately, it was time to enter the protected and historic Oswego and Erie Canals on our way to New York City.