At Oswego, New York we entered the historic Oswego Canal which runs south from Lake Ontario for 23.7 miles and seven locks to connect with the Erie Canal.  The Oswego was opened in 1828 and is known as one of the most successful inland waterways after the Erie, transporting goods from the Great Lakes and Midwest markets all along the eastern seaboard.  For close to a century, the Oswego River was an important waterway for trade.  Oswego gets it name from the native American word, “Osh-we-geh” which means “pouring out place”.  The name refers to the point where the river waters pour into Lake Ontario. 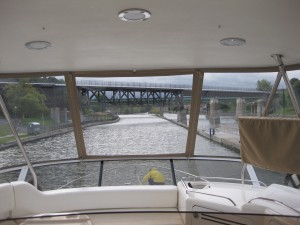 Oswego Lock 1 From The Bridge

In its early days, the canal was a separate waterway from the Oswego River dug alongside it and merging with it in several locations.  Tow paths were constructed next to it for mules and horses and it included 18 locks from Oswego to Syracuse.  Remanants of the old canal can be seen in many places along the way and some of the paths have been utilized for bicycle and walking trails known as the New York State Canalway Trail System.

Since we had come through Lake Erie from Windsor many people have asked us why we did not enter the Erie Canal at Buffalo (it runs from Buffalo to the Hudson)?   The reason is quite simple.  The Erie Canal west of the Oswego Canal is limited to just over 15.5 feet of air draft (from the water to a vertical obstruction like a bridge).  By entering at Oswego, New York and traveling south on the Oswego Canal then east on the Erie Canal to the Hudson River the air draft is 20.5 feet which is needed since Prime Time V has an air draft of 18.5 feet.  Even then, there were bridges that had us ducking our heads the clearance was that close.  If you look at the railway bridge ahead of us in the picture Prime Time’s radar head cleared this obstruction by less than two feet which is difficult to judge as you approach the structure. 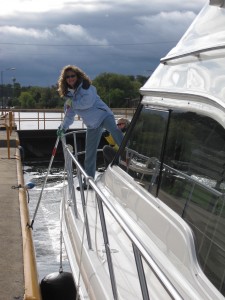 Susan In The Erie Canal

Our crew, John Kerr and Susan Duross were wonderful to have on board.  We developed a pattern with the ladies taking care of the front deck when we were in the locks and John holding the stern.  With September’s rains, the monotony of the number of locks and the green slime that coated the walls the crew was soon teasing me asking if their Captain was under a lot of stress sitting in the warm, dry bridge while perhaps getting a sore wrist pushing the bow thruster lever.  I admit it was stressful!

With just seven locks on the Oswego Canal we made it down to the Erie Canal by mid-afternoon and started our journey eastward where we stopped at Brewerton to our first taste of American fuel on this leg.  It was not the cheapest fuel price we had encountered but a bargain (when you are a Canadian) at $2.459 per US gallon.  That is roughly $0.66 ($Cdn) per litre for those of you who wanted to know how it competes with prices at home!

The next day it was an early start as we left Brewerton’s town docks and headed out for the 20 mile trip across Lake Oneida the only significant body of open water when traveling through the Oswego and Erie Canals system.  From here, we were now on the Erie Canal and heading east through the 22 locks and 153 miles that would take us into the Hudson River.

The Erie Canal was opened in 1825 three years before the Oswego and was an engineering marvel in its time.  The system unlocked an enormouse series of social and economic changes for America.  It spurred the westward movement of settlers giving access to rich land and resoursces west of the Appalachians and made New York the preeminent commercial city of the United States. 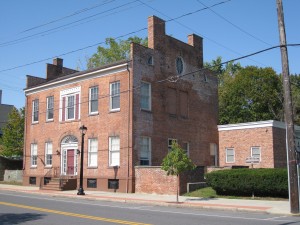 A Historic Building On The Erie Canal

The then-governor of New York envisioned a better way to move goods such as grain from the Great Lakes basin and he was successful in convincing the state legislature to authorized $7 million for construction of a canal 363 miles long, 40 feet wide and four feet deep.  The effect of the canal was immediate.  Freight rates for grain dropped from $100 per ton by road to $10 per ton by canal overnight.  In 1829, there were 3,460 bushels of wheat transported down the canal from Buffalo.  By 1837 this figure had increased to 500,000 bushels.  Four years later it reached one million.  The tolls alone recouped the cost of construction.

Unfortunately, by the early 1900’s railways were beginning to cut into the Canal’s commercial value and when the St. Lawrence Seaway opened in 1959 commercial traffic virtually disappeared.  Today the canal system with all of its related tributaries is used primarily by pleasure craft and fortunately the State of New York recognizes the canal systems potential to attract tourism that relates to the canal.  All along the system you can see dredging, work barges and boats as well as repairs to the locks and dams.   To read more about the New York State Canal System visit http://www.nyscanals.gov/

Heritage Canada should take a lesson on how to maintain the Trent-Severn and Rideau Waterways from the State of New York.  For those of you that have traveled these two systems you can see the rapidly deteriorating infrastructure. 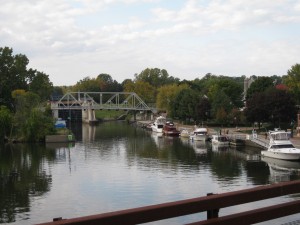 As we traveled through the Erie Locks we quickly developed a standard pattern which made the lockages easier as we progressed.  This allowed us to enjoy the fall colours which were just changing.  Most of the old industrial buildings along the shoreline in the villages were remanents from the 19th century when businesses grew and shipped their goods along this inexpensive transportation route.  Companies like Hershey’s and Remington were there in the prime of the waterway but had moved on abandoning the structures that had housed them.

Too bad really, since most of these building could be considered historically significant and could be restored to their former glory but, with the recession in the United States and the long lasting depression that holds on in this part of New York State it is doubtful they will be restored soon.

As we traveled east along the Erie the sun was starting to get the upper hand on the rain showers that never really broke but continued to threaten since we had left Belleville.  We had hoped for better weather along the way but at least it had not poured on my crew.

The last thing you want is a mutiny on board when they had so graciously offered their services. 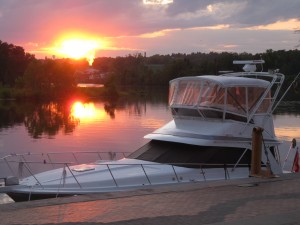 When we reached Waterford, New York we had traveled through all but one of the Erie Canal locks and we were greeted by Bob and Debbie MacConnell our travel partners to Florida and Bahamas on their boat, Melanie Bear.  It was great to finally see them.  Bob and Deb have been friends of ours for longer than we can remember and the four of us had planned this trip for many years together.

Since Bob and Deb had been in Waterford for a day or two before we arrived they already knew where to go shopping, that there was a “farmers market” on Sunday morning right in front of the boat, that if you were very polite (read TIP) to the dockmaster the 24 hour could be extended indefinitely and that you could have breakfast at the local diner on the main street for $3.75.  It helps to have local knowledge.

The next stage of our trip would take us down the Hudson River to New York City.