We left Liberty Landing Marina across the Hudson River from New York City on Sunday, October 11th after our daughter and her boyfriend left to return to Canada for the balance of Thanksgiving Weekend with his family. 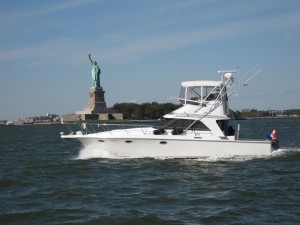 Bob and Debbie and Nancy and I were eager to get moving since the weather had a definite fall feel. We joked that we wanted to get south quick enough that we would never have to put long pants or jackets on this fall. Unfortunately, that would not be the case.

Once you clear New York Harbor and then pass Sandy Hook, New Jersey we turned south in the North Atlantic. This is one of the few places on the east coast south of New York where there is no inner channel such as the Intracoastal Waterway offers further south. For that reason, you have to carefully choose which day the wind and wave conditions will be favourable for the trip. It is roughly 150 miles from NYC to Cape May where we were to enter Delaware Bay the first inshore route of the ICW.

Fortunately, the wave conditions were a reasonable 3 to 4 feet and we cruised on plane as we left. About 35 miles from New York the starboard motor began to slow which normally signals fuel starvation. Considering the time of day and the possibility that it could be something worse than a clogged filter we decided to stop in Brielle, New Jersey.

As we pulled in to get fresh fuel we noticed that there was a strong current flowing out the river to the ocean. Later, tied to the dock we experienced our first strong tidal surge with currents up to 4 knots creating eddy pools around the docks and a tide change of 7 feet. We watched a young fellow about 12 years old fishing from the dock wondering if his parents even knew he was here. One slip and he would be lost to the ocean.

We left the next morning to run roughly 100 miles to Cape May. Although I had changed the filters on both engines and the boat was now running well, we decided to have a Caterpillar mechanic check the engines just to be sure everything was all right. A quick check indicated all was OK but since it was late in the morning, Nancy and I decided to take a short break for the day to see Cape May. 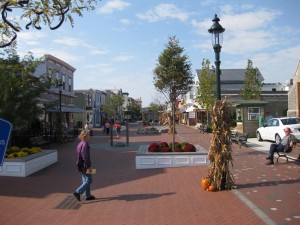 Cape May is a very historic town with a history linked to the sea. Fishing, crabbing and tourism are today’s economic drivers but the history of the community lies intact in the buildings in its downtown core. This was the year that town was celebrating its 400th anniversary. While we spent the better part of a day here Cape May is on our list of places to return to to enjoy the atmosphere and the activities that are available in the summer.

The following day, we left Cape May heading west into Delaware Bay to the C & D Canal, a 15 mile waterway that links the west end of Delaware Bay to Chesapeake Bay. It was here we caught Melanie Bear once again as they had left Cape May one day earlier. The weather had turned cooler and was now overcast with a forecast that looked even worse (rain) for the next five days. We pushed hard passing Annapolis, MD for Herrington Harbor.

The marina facilities were good but the weather forecast delivered on its promise. We were locked into this port for five nights until the rain and fog cleared.

A trip to the Annapolis Power Boat Show which was underway provide the distraction (if not wet) that we all needed.  Nothing better than going to a boat show in the rain.

It was here that even the local fauna was trying to stay dry. We returned from a walk (in the rain) to find a local snake lying on the swim platform and quite convinced he was not interested in getting back in the water.  Even after a thorough soaking with the water hose this snake  only left reluctantly.

Sadly, we would push on missing Chesapeake Bay but knowing we will return sometime in the future.  We left Herrington Harbor at 7:00 AM on October 19th staying that night at Deltaville, Maryland.  Nothing exciting to report here except that despite the overcast we managed to cruise “with no rain”, a first in at least six days.

The next day we pushed on through Norfolk, Virginia one of America’s largest naval bases.  We can not even begin to explain the size and scope of the naval establishment here.

Literally miles of ships lining the shores with project management barges close by to supervise the ship’s refit.  What did surprise me though was the lack of military security around the shoreline and the floating vessels as we had seen in 2007 when we brought Prime Time V north to Canada.  With the current “high security” alerts that have been posted in the USA there were no small patrol vessels around  watching for pleasure craft coming too close. 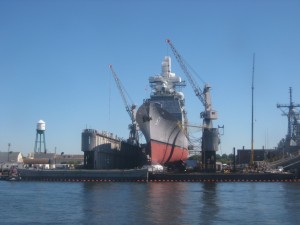 What is truly amazing about this yard is the size of the vessels that they lift in the dry docks for repair.  I am sure someone can identify the class of warship this is in the picture but small it is not and this dry dock is obviously up to the task of lifting it out of the water to facilitate the repairs.

As fascinating as the naval shipyards were, we pushed on just south of Norfolk to Great Bridge, Virginia the first “noticeable” time that you are in the Atlantic Intracoastal Waterway  and Great Bridge is a small village that has a lock separating the brackish run-off of the Dismal Swamp from the Atlantic Ocean.  For the first time since the Erie Canal we would be relegated to a slow passage through the narrow ICW south of the Chesapeake.

When we cleared the lock and the bridge we tucked into the local docks for the night knowing that we would not be facing any open water unless we chose to for some time.

In spite of the cold and sometimes overcast or rainy weather we knew this would be a slower and easier part of our journey south to Florida and Bahamas.