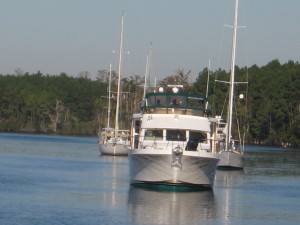 Traffic Jam on the ICW

We woke up the morning of October 12th at Great Bridge to sunshine and 72 degree weather.  No rush since the first bridge only a couple of miles away in the ICW did not open until 9:00 AM.  We knew this would be a day of slow, relaxing cruising but with plenty of south bound traffic.  After the five days over rain we had received the previous week every cruiser was anxious to put in some miles in search of warm weather.

The same group of cruisers could be heard on the VHF radio for days on end.  Breezy Rider, Sun Cat, Pretty Penny and others, all with similar requests for bridge openings, slow passes and general exchanges between friends who were on the same ICW journey.  Considering the differences in size and speeds of the boats it was amazing how courteous each was to the other.

This section of the ICW takes you through the Dismal Swamp area which is a good description of the area we would travel through.  Low land and in some cases swamp with tall, thick mangrove areas that reminded you of scenes from the Burt Reynolds movie, Deliverance. Seen the boats with big, brown stains on the bow commonly referred to as a Carolina Smile?  The staining is caused by the rotting vegetation and turns the water to a tea coloured brown.  This is the area where they get these stains and nothing short of muriatic acid will remove it.  That and lots of elbow grease. 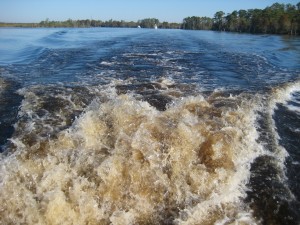 This section of the ICW serves boaters well though since it provides protection from wind and waves from Norfolk, Virginia to Moorehead City, North Carolina.  It if did not exist you would be forced into the open ocean with no refuge for more than 100 miles.  The other option would be Pamlico Sound which is very shallow, open and most likely very rough in stormy weather.

As I said, traffic would be heavy and the area requires you to go slow.  Today, we would travel only 37 miles of roughly 220 to Beaufort, NC where we would decide whether to go out on the ocean or stay on the ICW.  Our first day would take 7 hours as we encountered bridges and generally tight conditions in the ICW.  Our plan was to go to Coinjock, North Carolina a spot that Bob and I had stayed in when we brought the boat north with Brian and John in 2007.

Coinjock’s only claim to fame (other than the marina) is its restaurant which the staff and owners were quite emphatic offered “Best Roast Beef In America”. Big - yes.  Tasty - yes.  But loaded with MSG to tenderize the meat.  Nancy and I both were staring at the ceiling all night unable to go to sleep since we both react to MSG’s affects.  A great place to stay though! 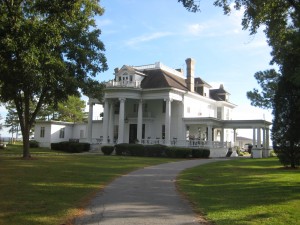 The next day we woke to more sunshine and 75 degree F weather.  Our trip would take us on through waterways named Albemarle Sound and the Alligator and Pungo Rivers.  We had passed most of the slower vessels and the open waters of the Albemarle allowed us to spin up the Cats and cover 89 miles in 6 hours.  Much better time, 2-1/2 times the distance in one hour less than the previous day.

We arrived in Bellehaven, North Carolina in the early afternoon in time to walk through the village which while quaint was quite a depressed area.  The marina had a hotel on the property in an old columned home reminiscent of Gone with the Wind. You could almost see Scarlett on the front porch waiting for Rhett Butler.  In the lobby, which was be refinished, there was an advertisement from Sear Roebuck circa 1908 advertising complete home kits that delivered all the materials to build this exact home.

We walked about the village taking in the afternoon sunshine.  We didn’t expect too much from this Bellehaven but, it was one of our more pleasant stops along the ICW so far.  Although it was near Halloween, Nancy and Debbie collected pine cones for a center piece on our boats for Christmas.  Probably a little premature but, both of these ladies had their hope set on seeing the children at Christmas in Fort Lauderdale, Florida. 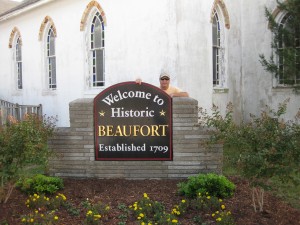 The next day, October 23rd, our 80th day on board since we left Honey Harbour, Ontario in August, we pushed on to Beaufort (pronounced Bow-Fort), North Carolina.  72 miles through the ICW in 8 hours left us with the desire to take a day of well needed rest.  Besides, the winds were rising, the forecast was for rain the next day and it was time to make a decision.  Run outside directly to Hilton Head or continue on the ICW, the more protected route.

With a day off, we left the decision to the weather Gods.  The next day was for rest, then we would make the decision on which route we would take.