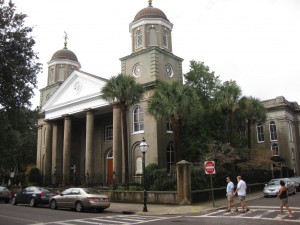 If you were left with the impression that so far the trip south was just a process to get the boats south that would probably be correct.  Other boaters have confirmed that the weather had been very poor for an ICW fall journey.

As we left Beaufort, North Carolina after one day of rest our decision whether to take the ICW or the ocean route was determined once again by the weather. Waves south of Cape Fear near Beaufort were 4 to 6 feet and in some areas even higher and the day dawned with what else, rain!

On our first day we cruised 8 hours and made it 83 miles to Wrightsville Beach, NC.  Wirghtsville Beach has little to claim other than its access to the ocean from the ICW. A quiet night on board and we were off again the next day traveling 6 hours and 67 miles to Myrtle Beach, SC. Once again, a raining day from the heavens and 4 to 6 foot waves on the ocean.

By our third day, October 27th, we arrived in Charleston, South Carolina. It was a good day since we had traveled 115 miles in 7 hours but, best of all, the sun was peeking out of the clouds as we arrived. Charleston was a place we had been reading about. A city with southern charm and history so, after three solid days of running the crews insisted on a lay day to convert from sailors to tourists. 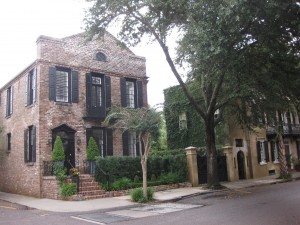 Charleston’s architecture and history are probably the two things that bring travel magazines back frequently for a source of articles and it is not without reason. The city’s history, culture and love of good gourmet restaurants all conspire to make this a special place to visit.

The British founded Charleston in 1670 and was named after King Charles II. Colonists on the ship Carolina had originally planned to settle at Port Royal but the chief of the Kiawah Indians convinced them to move farther north. Within 10 years they had relocated to what locals refer to as “The Peninsula” or the site of the current downtown. The Peninsula is formed by the convergence of the Ashley River and Charleston Harbor. Within two years there were nearly 100 houses built establishing a vibrant community.

Of course many people are amused by the slow drawl of the southern belles and men of South Carolina and Georgia but it has a historical background that justifies their speaches tone and intonation. In the 17th and 18th century, English blended with the language of French Huguenots fleeing religious persecution. Many came by way of Barbados adding a Caribbean flair to the language and city’s lifestyle. The Spanish were also here and slaves certainly had a huge impact on the food, arts and language. Gullah, a patois of all the languages is still spoken on the sea islands in the area today.  (More on Gullah follows.) 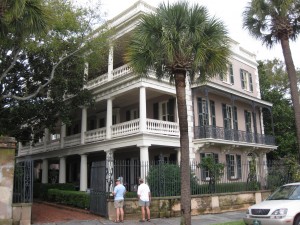 This is also Confederate country as well and there is no doubt denial in theri minds whether the Unionists of the Confederates won the war, at least in South Carolina. Fort Sumter sits across from Charleston and according to local lore this is where cadets shelled to begin the Civil War. Maintained by U.S. Park Service, the rangers (northerners?) have a slightly different interpretation.

While we were walking through the park at the tip of the Battery I came across a bronze cast sign as you viewed Fort Sumter. According to local record at least the Confederate General in charge of the fort did not lose the battle to Union forces but instead “Ceased to Defend”. I thought this was not only a humorous description of a historical event but an indication of the southern pride and use of language that still exists to today.

And, as you have seen by the pictures, the historic architecture of Charleston is very interesting. The Battery is an area along the water front is where wealthy merchants built glorious homes reflecting their wealth and power in the community. There are also single homes, unique to Charleston which were built one room wide. You enter through a door onto a piazza giving the occupants privacy in the town.

All of these homes are surrounded by main streets and small lanes and the community was bonded with churches, the Old Exchange Building that used to house a prison and the Old Market that really was a market for food items, not slaves (the slave market is a few blocks away). 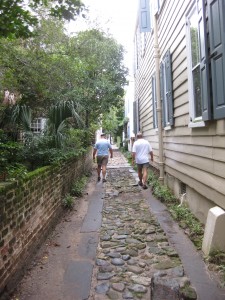 A Street, But No Cars!

The best part of Charleston is its citizens. Stand on a street corner with a city map for even just a few seconds and the locals will offer directions or recommendations on what to see and do. Definitely a place we want to come back to. 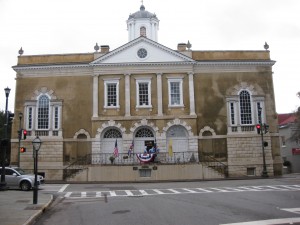 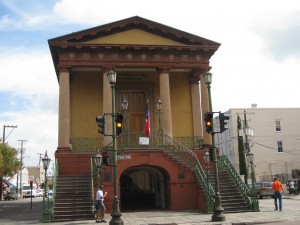