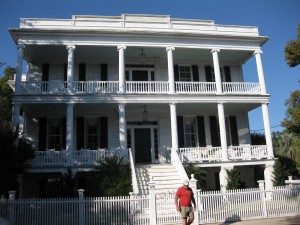 Beaufort, South Carolina was established in 1514 and was first settle by the Spanish, then the French followed by the English. It endured Indian uprisings, occupation by the British and Union forces. It is in the heart of what has been aptly called “Low Country”.

As you will see from the pictures, film makers have used Beaufort as the location for movies like The Big Chill, The Prince of Tides and Forest Gump. The main attraction is the homes that have been lovingly restored to their original style which is unique compared to the homes of Charleston.

The style is more West Indian with a T-shaped floor plan, elevated first floors (rising waters in hurricanes and a place where the staff were sometimes housed), high ceilings and porches on the first and second floors which not only allowed a place to sit outside but offered shade to the inside of the building as well.

Magnolia and Dogwood trees take priority over sidewalks, roadways and traffic and some of these trees have obviously survived for over 100 years.

While we were here, the local merchants closed the main street of the town to hold a “Halloween Party” for the local 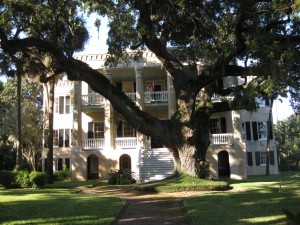 children who attended with their parents. Each shop offered the Trick-or-Treaters candies under their parent’s supervision and it was great to see all of the children dressed in costume.

The Low Country region of South Carolina and Georgia is home to the Gullah people. African-Americans whose ancestors were transported from Africa to the Carolina Colony in the late 1500’s. The Gullah region is focused in the Low Country, which includes the (Carolina) coastal plain and the Sea Islands.

Slaves from the West African rice-growing region were selected for transport to the American plantations for the skills in cultivation of the crop. Those slaves were retained and sent to the colony through the ports of Savannah and Charleston. By the 1700’s, the Africans had transformed the agricultural Low Country into a booming cotton and rice industry. A large, enslaved work force combined with disease and the Civil War, forced many white inhabitants out of the region and resulted in African dominated populations, complete with its traditions and language, throughout the Sea Islands. 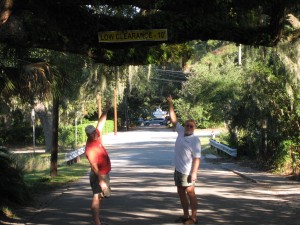 The group became known as the ”Gullah”. Gullah speak an English based Creole language which has its roots in African language. In addition to their language, their cuisine, music, crafts, farming practices and folk beliefs all have strong ties to the culture of their West and Central African ancestors.

On Friday, October 30th we fueled up and took a 26 mile passage on the ICW to Hilton Head, South Carolina, a community literally built by sea-side golf resorts. It was a short day but we were setting ourselves up for the right sea conditions and visibility to jump from Hilton Head, bypassing Georgia and coming back to shore at Jacksonville, Florida a distance of 122 miles.

Georgia’s section of the ICW has long been ignored by the US Army Corp of Engineers the agency that is responsible for maintaining it. Silting and tides have created many sections which are today impassible by cruising boats with drafts greater than four feet. Many have claimed to successfully negotiated the passage while others tell of their groundings along the way. We chose wait for the right day and leave Georgia to others more adventurous.

We arrived in Hilton Head to stay the first night in Palmetto Bay Marina, nothing special but we felt we only needed secure overnight accommodation for our early start the next day. The next morning we woke to find a fog bank that 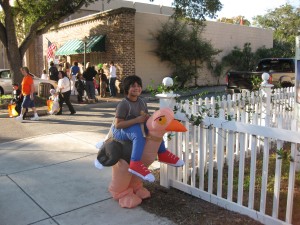 After two tries which took us late into the morning we decided to stay for the night at Harbour Town Yacht Basin closer to the channel leading to the ocean. This is also the home of the large, candy cane lighthouse you see in many of the post cards and pictures of Hilton Head. Climb to the top and you can see the 18th hole of Sea Pines Golf Club one of the more famous on the PGA Tour. By visiting the marina’s website you can see what we saw from the top of the lighthouse by live, internet camera. Just visit www.harbourtownyachtbasin.com and follow the links to the camera.

The next morning the fog had cleared and off we went on our first open-ocean running since we left Cape May. The sun was shining and the waves were less than two feet. Just a perfect day for a 122 mile, 8 hour ocean run!

We’ve made it to (northern) Florida and although Jacksonville is not quite the warm sunny weather we are looking for crossing into America’s southernmost state takes us one step closer to our goal. Warm winter weather. 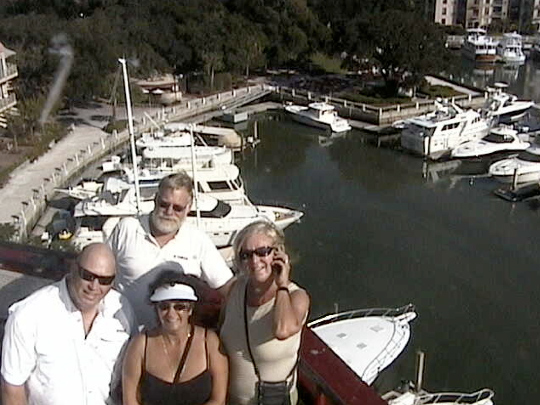