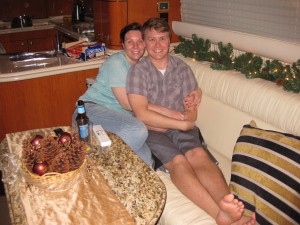 Karen & Peter In Florida for Christmas

On December 22nd, we left Stuart, Florida on our way to West Palm Beach where we would meet our daughter and her boyfriend on the 23rd. They were flying in for a week on board for Christmas and they would cruise south to Fort Lauderdale and Miami with us since neither had been to the boat when it was in Florida in 2007.

West Palm Beach Marina has been refitted with new floating docks, new electrical power and water lines and when we arrived the Captain’s lounge was still not open. It was a great place to stop since you are literally only four or five minutes to the downtown business district of West Palm. There are a number of good restaurants and entertainment in the area. We’ll stop back here once we get back to the ICW just to enjoy West Palm’s ambiance.

The weather in December leading up to Christmas was still cooler than normal with periods of overcast and occasional rain.  As long as the rain held off we were content to travel in the comfort of the bridge on Prime Time albeit with the heat on making it a comfortable ride south to Fort Lauderdale and Miami.

Unfortunately, with the dismal weather we did not encounter very many manatees or dolphin as we traveled along the ICW.   Manatees are a hazard since their nose barely clears the water when they breath and their 600 to 800 pound body lies just below the surface easily within striking distance of the propellers on the boat.  These two were spotted sleeping in the Miami Beach Marina their propeller scars clearly visible on their backs. 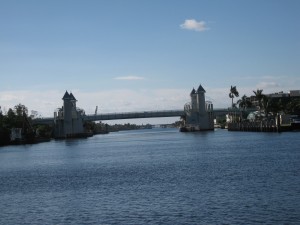 On Christmas eve, we pushed south on the ICW taking seven hours to travel 36.5 miles to the Swimming Hall of Fame Marina in Fort Lauderdale. It is a slow process since there are 19 bridges between West Palm Beach and Fort Lauderdale. Prime Time V’s air draft (from the water’s surface to its highest point) is 18.5 feet which requires us to wait for many of the bridges to open. All Southern Florida bridges that open are either single or double bascule bridges and while most open on demand some are on a half hour operating schedule requiring you to wait some times.  There are also a few bridges that are 65 feet or higher that do not open thus restricting the air draft for very large sail boats. 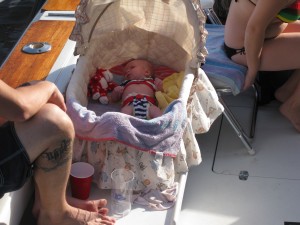 We arrived in the Swimming Hall of Fame Marina to meet the crew of Melanie Bear once again. This time the “crew” had grown from two to seven. This was a special Christmas for Bob and Debbie since not only did they have their son and daughter and their spouses there but also their three week old granddaughter who came to Florida to visit grandma and grandpa.

With only one day left to Christmas and the boats decorated with lights around the decks and garland and lights on the interior it seemed like a perfect if not different Christmas celebration with family. Christmas day dawned and we spent the morning opening presents on the bridge with the television on showing a picture of a fireplace with a decorated mantle and fire burning on the hearth. The Christmas presents were arranged around the television. 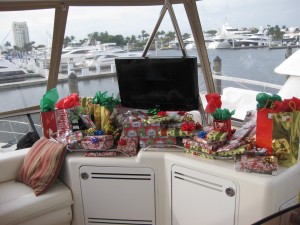 On Christmas Day, we received a call from a friend of ours who’s daughter and son-in-law asked us on the spur of the moment to join them for Christmas dinner. While at first reluctant to take them up on their offer Neil’s daughter Marilyn explained she would be pleased to have us. After all, four more people in addition to the ten or eleven that were already at the table wouldn’t be a problem. It was a great evening for a traditional Christmas Day dinner in a very beautiful home on the ICW with their boat parked at their back door by the pool.

We cruised to Miami to stay at the Miami Beach Marina within walking distance of Miami Beach with Karen and Peter on December 28th allowing them to see the sights of South Miami Beach for the first time. For those of you who have not been to Miami Beach it is a great spot to spend a day on the beach, chill out in a restaurant, catch the night life in one of the bars along the strip or just chill-out watching the people. It is what you have seen of South Beach on television and more.

If South Beach not your cup of tea try Lincoln Road which has been turned into a pedestrian mall for about six or seven blocks and has many of the fine shops you read about but seldom see. It is another great spot for dining as well as watching the beautiful people of South Beach and frequently their dogs.

Karen and Peter had to get back to Canada to visit Peter’s family so, they left to go home on December 30th from 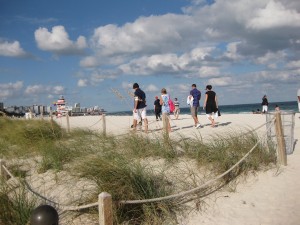 Miami while we ran the Atlantic Ocean from Miami back to Fort Lauderdale our kick off point to Bimini, Bahamas.

It was a great family Christmas before we were to leave to cross the Gulf Stream.