About the Bahama Islands

To quote Kurt Russell, the star in the movie Captain Ron -  “This isn’t the Pirates of the Caribbean boss!  This is the the Spanish Main!  The land of who-do, voodoo and all sorts of scary stuff!” We have finally arrived in Bimini, Bahamas the destination that we had dreamed about visiting by boat for many years. 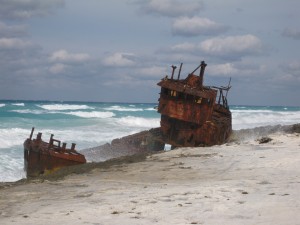 Bahamas is the location of the pirate stories that you heard when you were a kid.  History records Christopher Columbus as the first explorer to reach Bahamas but, he was just the first to record his landing. In the 10th century, Lucayan Indians (a branch of the Arawaks) settled in The Bahamas. The Lucayans had fled the Lesser Antilles to avoid the Carib Indians, who were their enemies, astute warriors and cannibals. The Lucayan Indians were a very peaceful people, who farmed, lived in thatch huts, used stone tools and made their own pottery. They were politically, socially and religiously advanced. Christopher Columbus arrived in 1492 on San Salvador (the former name of Cat Island), he enslaved them and coupled with new diseases brought by Columbus and crew, wiped out the entire tribe within 25 years.

The Bahamas became a favored hunting ground for privateers, pirates and wreckers from the late 1600’s through the early 1700’s. This was largely due to the ineffective governors and the many inlets, islands, islets, shoals and channels that provided hiding places to monitor the main passageway for merchant ships and Spanish Galleons.  Of course, England, France, the Dutch and other European countries turned a blind eye to the privateers who plunder the Spanish fleet.  Spain after all, was profiting from the New World and they wanted their share without the investment. 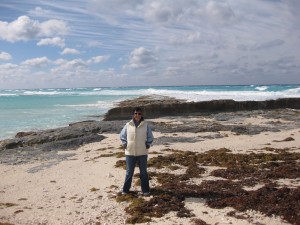 Today, the Commonwealth of The Bahamas consists of 700 Islands and nearly 2,500 cays. About 30 of these islands are inhabited. The capital city of Nassau is located on New Providence Island. Close by is Paradise Island which is accessed by bridges from Nassau. The nation’s second city, Freeport, is located in Grand Bahama Island along with the port city of Lucaya. The other populated islands and cays are called the Abacos, Andros, Eleuthera and Exumas chains of islands, the later being commonly known as the Family Islands.

The many islands and cays of The Bahamas stretch southeast off the Florida coast.  The closest Island to the U.S. is Bimini, about 45 miles off the coast of Florida. The islands and cays sprawl across nearly 100,000 square miles of ocean, beginning at the northern point east of Palm Beach, Florida and spanning practically 350 miles to the southeast where they come as close as 50 miles of Cuba and Haiti.

For our first trip to Bahamas by boat our plan was to cross to Bimini where we would clear Customs & Immigration then move on to Nassau and finally move south to the Exumas Chain farther south.  The logic in our minds was simple.  The further south you go, the warmer the weather.  True but, we were to learn that winter of 2010 proved to be one of the coldest and windiest since the 1960’s. 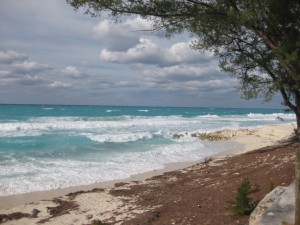 We crossed the Gulf Stream on January 9th, 2010 leaving Fort Lauderdale early in the morning.  The forecast predicted low winds and calm sea conditions and for once, the weatherman’s predictions proved to be correct.  Steering 130 degrees opn dead flat water conditions we cruised at a leisurely 8 to 9 knots across to Bimini.  Good thing we did not wait for another day because, as predicted the next day brought winds out of the North West at 20 knots which kept us pinned in Bimini for the next three days.

The weather did give us a chance to walk around North Bimini and we found that as an island that is dependent on fishing and tourism from the United States the US recession had direct effects on the local economy.  Bimini Big Resort once noted as a destination for the South Florida game fishing community was closed and you could tell that unemployment was rampant in the village of Alice Town.

The little village that once advertised Hemingway’s Bar (lost to fire) is now in a state of disrepair waiting for the next economic boom to build its economy.  (This is where Hemingway set his book Islands in the Stream when he wrote it in the 30’s.) 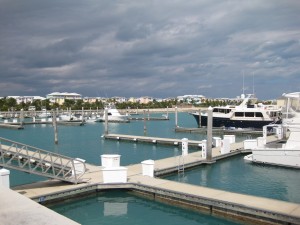 To the north of Alice Town on North Bimini lies Bimini Bay Island Resort a new development carved from the mangrove swamps.  Environmentalists fought this development over their concerns to the damage it would do to the eco-structure but, in spite of numerous protests the development proceeded.  Today, the development has its own electrical, water and sewage treatment plants as well as a small shops, a hotel, single family homes and condominiums.  All of this sets the back drop for a full service marina.

We had finally arrived in Bahamas and our education was about to begin to learn how to survive on a boat in the islands!