On January 13th, 2010 the winds died in Bimini so, we left early that morning to run 87.5 miles east (9 hours) across the Bimini Bank to Chub Cay.  The run was uneventful and with barely five feet below the hull and props we crossed this section at a leisurely 8 to 9 knots enjoying the warming air and for the first time, the very clear Bahamian water allowing us to see the flat sand bottom below.

Bahamas has reasonably good charts but, since the British Admiralty were the last to conduct official hydrography and sand bars tend to shift while coral heads grow over short periods of time you need to keep a watchful eye and learn how to read the colors which reveal visual clues to the water depth.  Light green means shallow water, dark green could be plant growth or coral and dark blues tell you that the water is very deep.  If the bright sun is behind you the bottom contours are there to be read.  These would be the new boating realities that we would have to learn to navigate in the Bahamas. 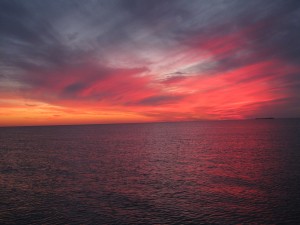 When we arrived in Chub Cay Melanie Bear and Prime Time V would experience their first time at anchor in Bahamas and overall it was a pleasant night off of a sand beach protected from the mild northwest wind.

By morning we were ready for the last 34.2 miles to Nassau.  As we crossed the Tongue of the Ocean the seas built to 2 to 3 feet from the side.  The Tongue of the Ocean is the name of a deep oceanic trench that separates the islands of Andros and New Providence.  The depth of the water drops from 115 feet off Andros Island barrier reef to over 6000 feet and the drop is nearly 100 miles long.

The US Navy runs small, highly restricted navy bases along Andros Island’s eastern shore and it is said that the Tongue is lined with hydrophones and is an excellent training area for American submariners.

You will never know for sure because you won’t see them but, my guess is that whoever and whatever is below the surface in the Tongue of the Ocean knows who is above them at all times.  And for Tom Clancy readers perhaps there are not just US Navy submarines under the surface but other nations stealthily probing a territory the USA and Bahamas assume they control. 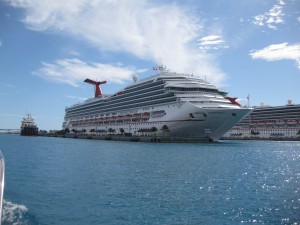 Oasis of the Seas is 1,187 feet long, 208 feet wide and towers 236 feet above the surface of the ocean.  By comparison it holds 5,400 passengers nearly double Conquest’s 2,974, weighs in at an impressive 225,282 Tonnes compared to 110,000 for Conquest and is driven by six 25, 290 horse power engines.  It is the same size as the aircraft carrier “Nimitz” and more than double the size of Titanic.  Needless to say, you don’t want to be in Nassau’s straw market or try to hail a taxi when this ship comes into dock!

While the south side of the channel holds cruise ship and freight docks as well as the downtown business core of Nassau the north shore of the harbor is protect by Paradise Island home to the hotel and casino complex called “Atlantis”.  Paradise Island is the home to up-scale condominiums as well as a PGA caliber 18 hole golf complex surrounded by single family homes on the eastern tip of the island.  A large causeway spans the harbor from Paradise Island to Nassau’s business center. 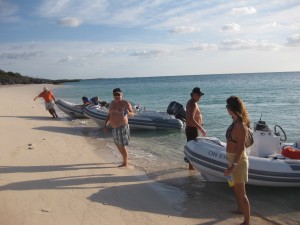 After a fuel stop at Brown’s Marina and a rocking and rolling overnight stay at Nassau Yacht Haven, Prime Time V and Melanie Bear left the harbor to meet Dealers Choice who was ahead of us at Highbourne Cay.  Highbourne is only 38 miles from Nassau and only four hours at a slow cruise.  We arrived in time to remove the dingies and enjoy or first beach experience in Bahamas.  White sand, 78.5 degree F water and sunshine.  Finally, we had arrived!

Highbourne is near the northern tip of the Exuma Island Chain.  Unlike the Great Lakes Basin, good weather does not come from the west it comes from the east and if you quickly study this chain of islands it becomes apparent there is little shelter on the western side of most of the islands from bad weather.  The eastern side of the islands drop off quickly in most cases are you are typically exposed to the open ocean.

This night would be our first experience sleeping in a westerly blow and the boat in spite of it size bucked and rolled in the anchorage all night making sleeping almost impossible.  While the winds push you to the east strong currents may be to the side of the hull inducing a rocking motion front to back and side to side at the same time.

Can you get used to it?  You can but, it makes sleeping very unpleasant when it happens.