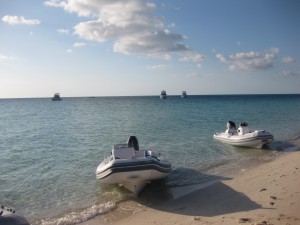 At Anchor Off Highbourne Cay

Arriving in Highbourne Cay meant that we had joined the northern end of the Exuma Island Chain commonly known to the local inhabitants as the “Family Islands”.  Highbourne is a well known, first class marina location which always boasts some of the larger yachts to ply the Bahamas Bank.  Although we wanted to stay, we were happy to keep moving south since the anchorage off of Highbourne’s beach left us exposed to southeast winds at 15 to 20 knots. 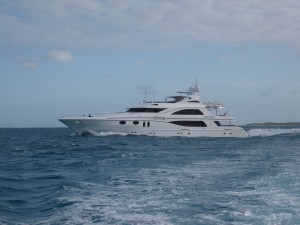 It was the only time during our trip that we would slip anchor during the night (2:10 AM!) and a gentle reminder to be vigilant when setting anchor and to check your position during the night.  After a one night stay we pulled anchor from Highbourne’s sand bottom and headed south on Saturday, January 16th to Norman’s Cay.   Our southern-most winter destination, Georgetown, Exumas was only 137 miles away and we anxious to continue south. 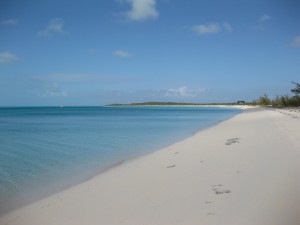 We were looking forward to visiting Norman’s since we had been there before and knew the beaches were beautiful and picture-perfect location to advertise Bahamas.  However, Normans has a some history.  The following information copied from Wikipedia tells of its past. 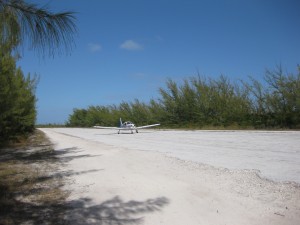 Norman’s Cay is a small Bahamian island in the Exumas, a chain of islands south and east of Nassau that served as the headquarters for Carlos Lehder’s drug-smuggling operation from 1978 to around 1982.

When Lehder arrived in Norman’s Cay in 1978 he started purchasing large pieces of property, including a home for himself, a hotel and an airstrip. Shortly after Lehder began pushing the native population and vacationers off of Norman’s Cay and gained full control of the island. Following Lehder’s arrival air traffic over the small island began to increase and armed guards began patrolling the beaches. In July 1980 a yacht belonging to a retired couple was found drifting off Norman’s Cay- blood stains were found when the boat was searched, and a corpse recovered.

As part of Palo Escobar’s Medellin Cartel, he used the island as a trans-shipment base for smuggling cocaine into the United States.  Lehder, first with his partner George Jung and later through Norman’s Cay, is often attributed with revolutionizing drug smuggling. The typical method of transporting small shipments often carried by human drug mules, either through digestion or in their luggage, onto commercial airlines, was surpassed by the use of small aircraft shipping entire loads of cocaine.

Lehder eventually constructed a 3,300-foot (1,000 m) long runway for his fleet of aircraft. In order to protect the island, armed guards and attack dogs patrolled the beaches and runway, and radar was employed. Any pilot foolish enough to land there was quickly warned off by heavily armed guards. The island served a strategic point as stop for Colombian drug flights to refuel and rest before proceeding to the United States.

With the Bahamian authorities looking the other way and the local inhabitants scared off, the island became a haven of debauchery for Lehder and his associates. Carlos Toro remembers, “Norman’s Cay was a playground. I have a vivid picture of being picked up in a Land Rover with the top down and naked women driving to come and welcome me from my airplane… And there we partied. And it was a Sodom and Gomorrah… drugs, sex, no police… you made the rules… and it was fun.”

In 1982, under pressure from US law enforcement, and despite years of turning a blind eye, the Bahamian government began to crack down on the activities on Norman’s Cay, ultimately confiscating Lehder’s land. It is now a tourist destination that can be reached by charter flight.

Regardless of its history, some of the original inhabitants of the island who left during the drug cartels time have returned to reclaim the island.  After being at sea for a few days, the hamburgers at the restaurant on Norman’s Cay beach can only be described as food from heaven. 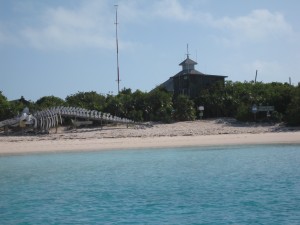 After a night at anchor off of Norman’s Cay we continued our journey south to Wardwick Wells.  This island is headquarters to a marine heritage park that provides eco-protection to the waters for a roughly 20 miles stretch of islands.  The park provides mooring balls where we stayed overnight.  Unfortunately, the area where we were moored was exposed to the west so, even though afforded some protection the boat rocked all night limiting our sleep.  This is a phenomenon that the Exuma chain is known for.  Usually, bad weather comes from westerly winds and few of the islands offer protection for mooring or anchoring on the west side of the chain.  Winds coupled with tidal surge can make it nearly impossible to have a comfortable sleep.

None-the-less, Wardwick Wells is on our list of places to stay in 2011 when we return since the islands are beautiful and there appears to be many interesting areas to explore.