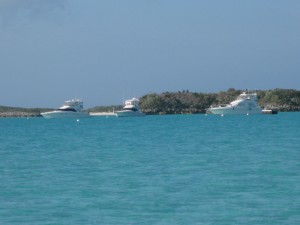 At Anchor Near Compass Cay

On January 18th, 2010 we left Wardwick Wells traveling south 15 miles to Compass Cay.  We were now far enough south to enjoy the tropical winter sun which allowed us to stop and explore different anchorages and the occasional marina when either wind, current or wave conditions precluded staying in an open anchorage.

We quickly found our favourite place in Bahamas in the area of Compass, Samson and Staniel Cays.  Not only were the islands post card perfect examples of what you think the Bahamas should be but, the area had special attractions such as Thunder Ball Cave, the Staniel Cay Yacht Club, the swimming pigs at Big Major’s Spot and the sharks which swam around the docks at Compass Cay.  The area also afforded us the opportunity to frequently dinghy between these cays and to visit the local watering holes and beaches.

The cut into Compass Cay allowed us our first real experience in anchoring in tidal currents.  For five to six hours we would be pushed in the direction of the ocean as the tide flowed away from the islands only to reverse for the next five to six hours with the incoming tide.  At three to four knots we would test the limits of our Bruce anchor’s holding power.  From this anchorage, we could dinghy a very short distance to the Compass Cay Marina to enjoy the noon hour burgers cooked on an open grill on the deck and watch the sand sharks circle the short pier by the office looking for their daily rations.  Many people would climb into the three feet of water surrounding the dock and join 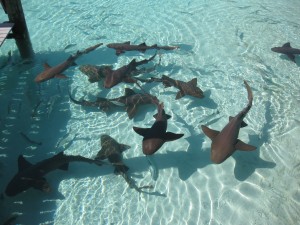 the sharks as they swam around in lazy circles.  No need to fear these creatures.  Sand sharks have no teeth and virtually inhale their food rather than biting it.

We also made our mark (literally) in Compass Compass Cay.  For those that chose to stay overnight, Tucker, the owner has brushes and paints to paint your own sign with your boat name on it.  These are mounted around the marina office.  You only have to find a piece of drift wood to use as your pallet.  We chose to leave our mark with the largest piece of 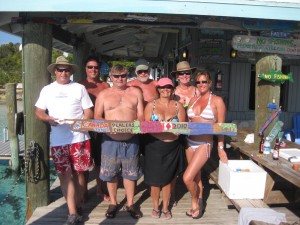 drift wood we could find.

The beach on Compass Cay is also one of the most beautiful and unspoiled in the Exumas chain of islands.  White sand, that feels like walking on icing sugar facing the ocean to the east.   From north to south it extends more than a mile in a gradual arc.

The island itself is virtually deserted except for the buildings and cottages near the marina.  Take a walk to the north and the path winds across the small hills for 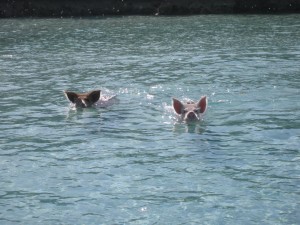 roughly five miles to Rachel’s Bubble Bath a small lagoon which rises and falls with the incoming and outgoing tide.

After four or five nights at Compass we decided to move south about three miles to Samson Cay and Big Major’s Spot.  Samson Cay is a lovely marina location that is protected from nearly all winds.  We sought shelter at Samson Cay a couple of times seeking protection from the strong westerly winds which sometimes made sleeping at anchor without protection nearly 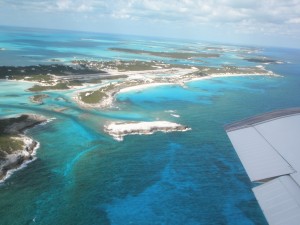 Big Major’s Spot is a large island located between Samson Cay and Staniel Cay and it was here we were introduced to the swimming pigs that live on the island.  Yes, I said swimming pigs!  A local farmer leaves the pigs on the island year round letting them forage for food on the island.  Pigs are smart though and they soon learned to swim out to the boats and beg for bread, vegetables or any other thing you chose to feed them.  Don’t get too close.  In their 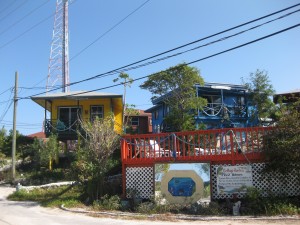 competition to get food they have been known to climb right into a dinghy to get right to the source.

Around the corner from Big Major’s Spot near Staniel Cay is grotto named Thunder Ball Cave from the movie of the same name.  If you go to the Staniel Cay Yacht Club you will find pictures of James Bond and all of the production crew from the 1960’s when the film was being produced.  Staniel Cay has quite a history if you read about it and today it is one of the largest settlements in the Exumas after 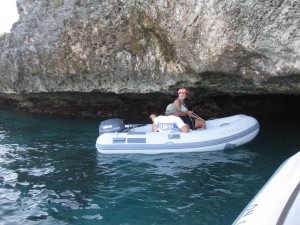 Cruising The Caves Near Staniel

George Town.  Its long, paved runway makes it a great spot to change crews or welcome guests aboard since there is both regular scheduled airline service and charters available.